Mr Lackey taught me geography at Xaverian and it was no small feat to actually get me a GCE ‘o’ level as a result. He was an intelligent mentor and had the key to success in exams. His particular method was to produce mnemonics for all the facts that we would need to regurgitate to be successful in the exam. Somehow these worked for me and the rest of the class. I would be surprised if anyone in the class failed as I held last position in class (Upper V 3) at that time. He also introduced boxing lessons to the school which I attended on occasions, never enough to develop the necessary skills but I did live a considerable distance from Rusholme, in Blackley.

He once asked me to deliver some tickets to a boxing event at St Clare’s secondary which I did. I trudged along in my school uniform and made my way to the Staff Room encountering some pretty awful language on the way which shocked my delicate sensibilities at that time. It all seemed so different from Xavs. As I had attended the primary school years before, I was even more grateful that my dad had the foresight (and was good enough to make sacrifices to pay) to move me to the prep school, I wouldn’t have thrived at St Clare’s…

At one point he was dating my cousin and this lasted a number of years. I got the impression from other relatives that she had been heart broken to realise that he was perfectly happy remaining a bachelor. In those far off days that seemed almost eccentric.  He was a truly nice bloke and probably the best teacher I had during my time at the school.

Having been a teacher myself, I’m not over keen on criticising others in my profession, but as the victim of the inadequacies apparent in the staff at Xavs in the 60s, I feel in a position to objectively pass comment. The recruitment policy, if there was one, was to play ultra safe… no women, no young inspirational firebrands… stick to middle aged white males, regardless of any ability to communicate. Mr CROTTY was one such member of staff. As noted by Bob, his methods were somewhat unorthodox. He would set a task… draw a map / copy from the blackboard or a book / dictate notes… then sit down and read The Times. When the inevitable noise broke out, he would walk the aisles between desks striking the heads of any boy who wasn’t bent over his book. He carried a ruler not only for striking purposes, but to actually measure the distance of head from book… 12″ was the recommended gap! 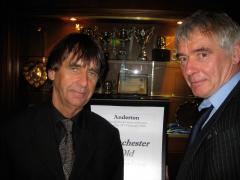 The rumour was that Crotty was suffering shell shock, but whatever the cause of his inability to teach… he just shouldn’t have been there… for his sake, or for ours. By year two we were fed up with his methods and delighted in taunting him. As he patrolled one side of the class, the opposite rows would sit bolt upright… Crotty would race across, ruler in hand only to discover on arrival that both rows had now got noses touching desks… meanwhile back in the other two rows, all were sitting up … this game would then continue for the whole of the lesson like some real life version of whack-a-mole.

In that second year, our form room was closest to the playing field and all the paraphernalia used for the Summer Show was temporarily stored there… including multiple sets of darts! Several targets were chalked onto the blackboard and every boy had at least one dart… Crotty arrived, saw the targets, turned his back on the class to erase them and on the shout of NOW, the blackboard was peppered with a blitz of darts. By the time he had turned round, every head was nose to desk… somehow that position of submission seemed to render the adopter immune to any form of punishment.

Another incident, this time in year 5, comes to mind… Crotty hadn’t changed but we were a lot more adventurous in our methods of disruption. By now he was regularly 5 minutes late in arriving for lessons which gave us a chance to be more creative. It was a hot Summer’s day and the windows were open… there were building works taking place on the new science block behind the classroom, so lots of building materials were to hand. We hauled in several lengths of scaffolding along with dozens of bricks and distributed them around the room at desk height… which cut the desks off from the front and blocked access to the aisles… all the boys along the back row then lit up and were billowing out smoke when Crotty entered the room. Incredibly, he didn’t appear to notice that anything was amiss and continued to deliver his lesson amid total mayhem…. Somehow, incredibly, maybe because I loved drawing maps with a fine nibbed pen and inks… I was one of the very few to pass Geography O Level.