Introduction I attended this school as far as I recall from 1952 to 1959. I came from a primary school via the 11+ and had no connection with the prep school. I left with seven O levels and three A levels. Apparently – job done. I have just stumbled across this blog and thank those … Read more 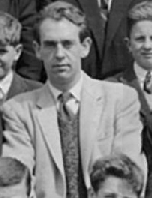 Pete Burrows took me for physics and maths in Lower Five Three. He was a great guy, an all round sportsman and occasionally took us for football. As a result of his recommendation I played for a cricket team  called The Crusaders based round the Longsight area for a short period until we had a … Read more